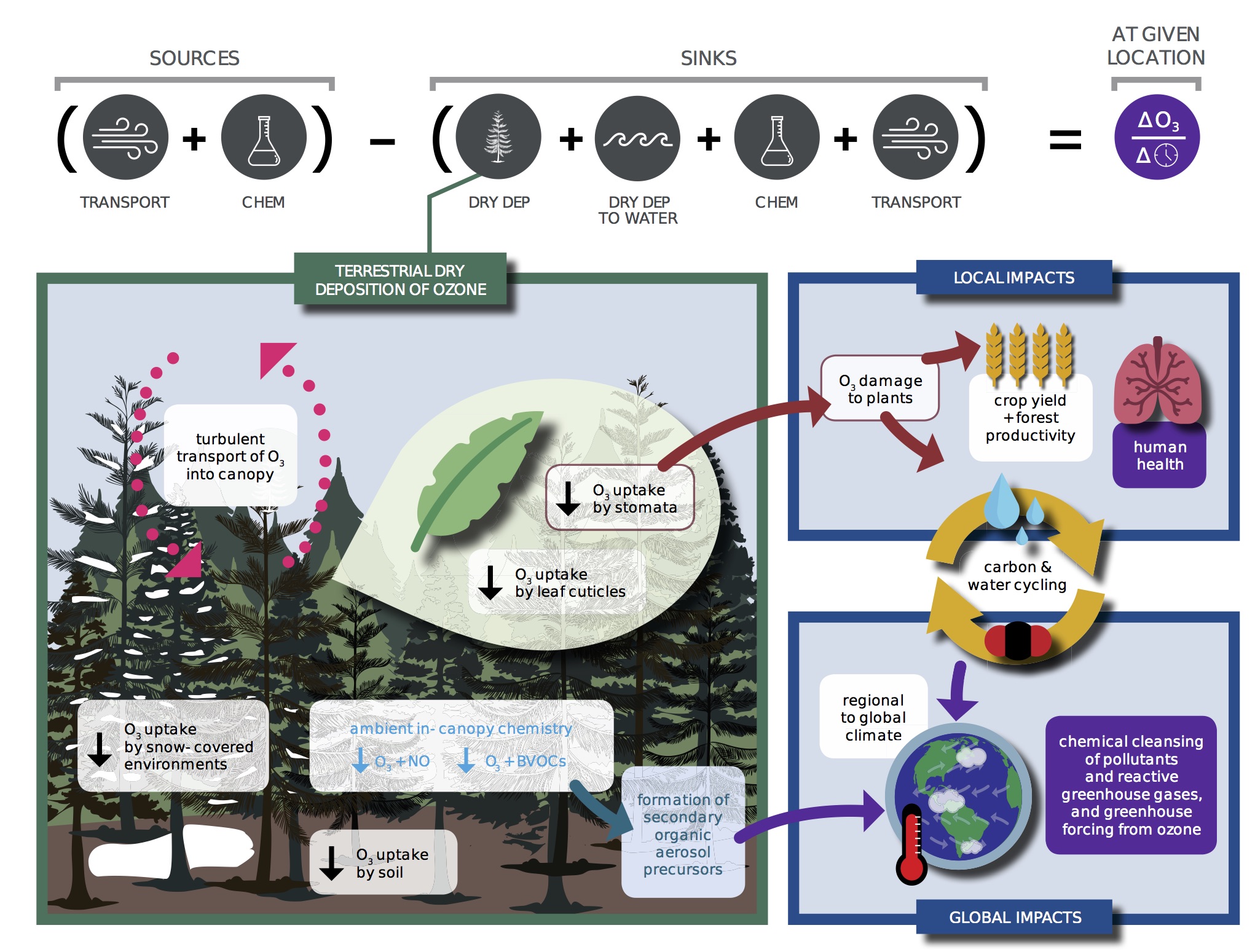 Dry deposition of ozone in the earth system: controlling processes and local-to-global impacts. Figure from Clifton et al. (2020a) and illustrated by Simmi Sinha (University Corporation for Atmospheric Research).

Tropospheric ozone is an air pollutant — harmful to both humans and vegetation — and a potent greenhouse gas, as well as the main source of the hydroxyl radical, which controls how long reactive greenhouse gases and toxic pollutants stay in the atmosphere. While the last thirty years of tropospheric ozone research focused on the role of sources, my research focuses on one of the main sinks, dry deposition. Dry deposition of ozone happens when turbulence transports ozone to the surface and surface-mediated chemistry removes ozone from the atmosphere. Ozone depositing through plant stomata (the small pores on leaves used for gas exchange) can be injurious to vegetation and influence local-to-global carbon and water cycling. Nonstomatal deposition, occurring to snow-covered surfaces, leaf cuticles, soil, or bodies of water, is highly uncertain, but an important fraction of the total ozone dry deposition. 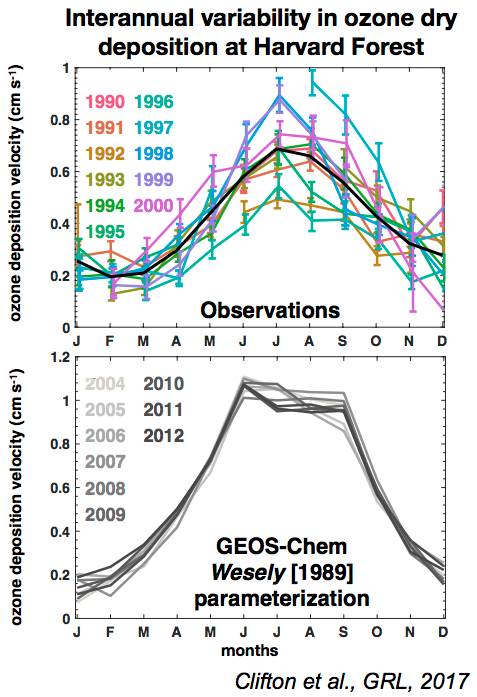 Constrain the influence of ozone dry deposition on air pollution

As illustrated by the above figure, the strong observed interannual variability in ozone deposition velocity at Harvard Forest is not simulated by a global chemical transport model using the widely-used Wesely (1989) dry deposition scheme. Given that simulated ambient ozone concentrations are sensitive to ozone deposition velocities, my findings suggest that using atmospheric chemistry models that employ the Wesely scheme to interpret observed year-to-year changes in ozone pollution may lead to a model overemphasis of the role of ozone precursor emissions.

The NOAA GFDL global chemistry-climate model now has dry deposition of some reactive trace gases and aerosols simulated in the land component of the model (Paulot et al., 2018), allowing for stomatal and nonstomatal deposition to be coupled to terrestrial carbon and water cycling, land use, and vegetation dynamics. I updated the dry deposition scheme in the GFDL model for ozone to be consistent with current understanding, and recently published a paper investigating the effect of dynamic representation of ozone dry deposition on ozone pollution. In Clifton et al. (2020b), I show that nonstomatal ozone dry deposition is important for ozone pollution, including hemisphere-scale levels and extremes.

Meteorology and plant functioning are often overlooked in considering how ozone damages ecosystems. Here I am using (i) a multilayer canopy large eddy simulation (LES) model that uniquely resolves turbulence above and inside the forest canopy (Patton et al., 2016) and (ii) the new version of the global NOAA GFDL model as described above to investigate interactions between ozone, meteorology, and stomatal aperture as relevant for ozone plant damage.